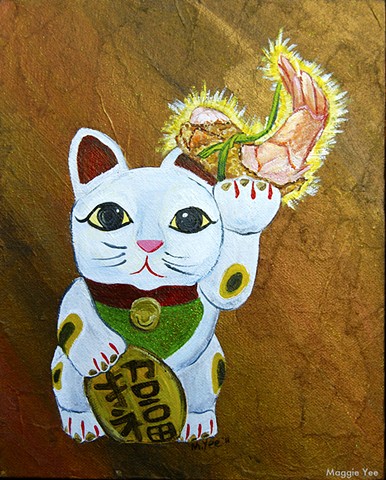 Feral cats were indigenous to Japan, however, a domesticated cat was imported from China, named Neko. Emperor Ichijo (987 - 1011) introduced the little creature to Japan. There are many legends and stories about Maneki Neko, this one is my favorite.

In the late 18th century, a Japanese prostitute named Usugumo lived and worked in a brothel in Yoshiwara, the red-light district of Tokyo. Usugumo had a beloved cat that could often be spotted at her side even while she worked. One night Usugumo woke up to use the bathroom and the cat began tugging at her dress as if to warn her.

Usugumo’s pimp, annoyed by the commotion, walked into the room and proceeded to chop off the cat’s head with a samurai sword, believing it bewitched. The head flew through the air and landed on an imminently attacking snake perched on the toilet. The cat’s teeth pierced the snake, killing it and saving Usugumo’s life.

Saddened by the loss of her faithful companion, Usugumo asked one of her customers to carve a statue of the cat from wood. The customer obliged and her memento became a symbol of good fortune throughout the brothel, then the neighborhood, and then Tokyo and eventually the rest of Japan.

Westerners have mistaken the Maneki Neko for a Chinese charm, however it’s origin is Japanese beginning in the 1870’s, during Japan’s Meiji Era. Maneki Neko have found their place in a variety of businesses and homes.

My painting of Maneki Neko hold up my wishes for good food.