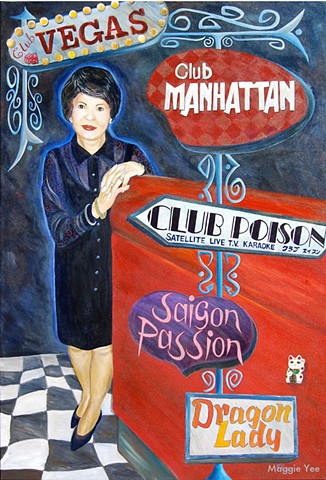 A Story about the Hostess Bar Companions I flew to Honolulu to take care of my father during his last days. We would watch the morning news on television. All of a sudden I would hear the paper shredder. Later, when he left the room I spied to see the shredded pieces. I saw partially chewed up photos of local old and new bars. Women had a cigarette and a drink one in each hand. Some had their chopsticks picking at the pupu platter (appetizers). My father never finished shredding the photos he shot of the haunts he frequented during his single life, after his divorce from my mother. He kept food in the cupboards and a roof over me and my siblings. After he passed I kept his photos from the early 70’s till a few months before his death. I pored over them in my grief. I chose these ladies because they kept my father company after (maybe even before) the last child me, left the nest. He took care of himself, never married and was entertained by these hostesses. I was inspired to paint them because of their expression, composition and their relationship to my father. Painting them helped me through my grieving process.