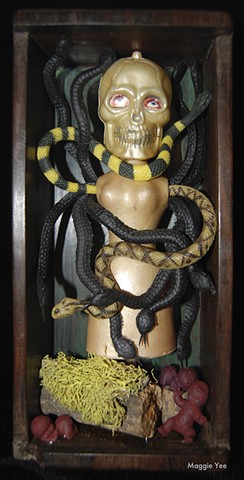 In Aztec mythology, Cihuacoatl, "snake woman" was one of a number of motherhood and fertility goddesses. Cihuacoatl was especially associated with midwives, and with the sweatbaths where midwives practiced. She is paired with Quilaztli and was considered a protectress of Chalmeca and patroness of Culhuacan. She helped Quetzalcoatl create the current race of humanity by grinding up bones from the previous ages, and mixing it with his blood. She is also the mother of Mixcoatl, whom she abandoned at a crossroads. Tradition says that she often returns there to weep for her lost son, only to find a sacrificial knife.

Although she was sometimes depicted as a young woman, similar to Xochiquetzal, she is more often shown as a fierce skull-faced old woman carrying the spears and shield of a warrior. Childbirth was sometimes compared to warfare and the women who died in childbirth were honored as fallen warriors. Their spirits, the Cihuateteo, were depicted with skeletal faces like Cihuacoatl. Like her, the Cihuateteo are thought to haunt crossroads at night to steal children.